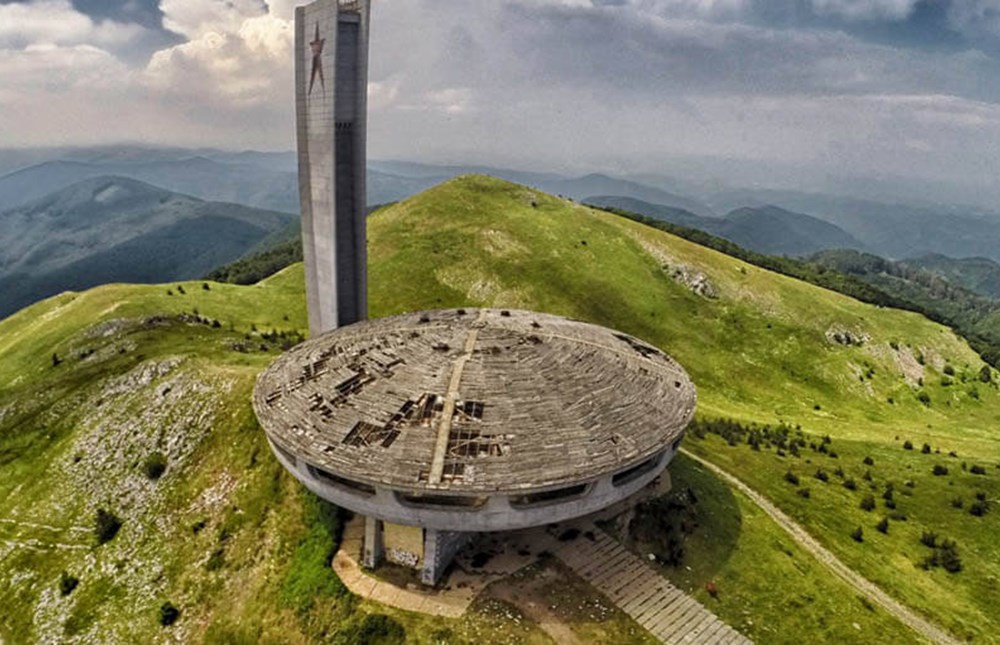 Our team at Insight Events Bulgaria presents to you one little known architectural jewel.

In Shipka Pass, on the top of 1441m peak in the mountainous scenery of central Bulgaria, a UFO-shaped building stands like a watchtower. This concrete giant on Buzludzha mountain is the former Headquarters of the Bulgarian Communist Party and it’s beaming up increasing numbers of curious visitors.

Right in the heart of Bulgaria, the Buzludzha monument’s sci-fi architecture, history and setting cast a powerful spell.

Originally built as an assembly hall for the socialists, the building has been abandoned for decades. The region itself is not so popular for travellers. Most of the foreign tourists visit Shipka (10km southwest of Buzludzha) to see its famous pink and gold church, or Kazanlak (12km further south), the gateway to Bulgaria’s Rose Valley. But the “Bulgarian UFO” is increasingly tempting for day trips from historic cities Plovdiv and Veliko Turnovo (about 2 hours drive).

The road leading to Buzludzha bends along cliffsides and rigid terrain. These steep valleys are the scene of a series of battles from the 19th-century Russo-Turkish War. During the Battles of Shipka Pass, Russian and Bulgarian fighters repelled Ottoman troops against incredible odds and in sub-zero conditions. By building a meeting hall here, socialists broke ground at a nexus of Bulgarian national pride.

When you get to the monument itself you cannot oversee the signs of its former greatness. On the exterior wall, slogans in huge concrete letters urge workers towards glory. But today the dominant message is the striking red graffiti that reads, ‘Never forget your past’. Next to it, the word ‘Communism’ is redrawn as a Coca-Cola logo.

Despite the prohibition of local authorities to enter the building due to safety reasons, the braver can make their way inside through one of the busted panels. Once inside one can really feel the grandeur and pride or the old regime as remains of red carpeting, mosaic portraits and latticed glass ceiling glow alongside modern graffiti and piles of debris.